The terms Exotic Game in Texas refer to foreign species introduced into new environments. Since colonization began, thousands of species of plants and animals have been brought to North America; many are now in Texas.

The term EXOTIC is commonly applied in Texas to foreign big game acquired by private landowners and released within fenced enclosures or allowed to range free.

Although exotics are not distributed statewide, several species have become prominent in certain regions. The most popular and numerous are species of deer, antelope, and sheep. Though less popular as a game animal, the European wild swine is among the most numerous introduced species.

Most of the more successful free-ranging exotic species in Texas come from the Asian continent. Axis Deer, Nilgai Antelope and Blackbuck Antelope were originally from India; the Sika deer was imported from Southeast Asia. The Mouflon Sheep was from Sardinia and Corsica, the Fallow deer from Asia Minor and southern Europe, and the European wild swine from Europe. The Aoudad Sheep was brought to Texas from North Africa.

Texans have acquired exotics to observe for pleasure, to increase production and income from rangelands by using combinations of animals that have varied food habits, and to sustain populations of species that are endangered on their native ranges. Most of the original exotic brood stock in Texas came from zoos. Subsequent stocking has been with animals mainly purchased from private landowners, zoos, and animal dealers. Exotics are not protected by the regulations that cover native game animals, and they are hunted at the prerogative of the landowner. 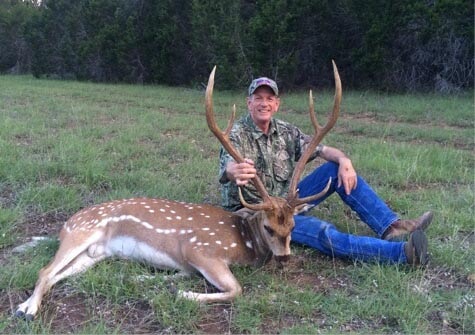 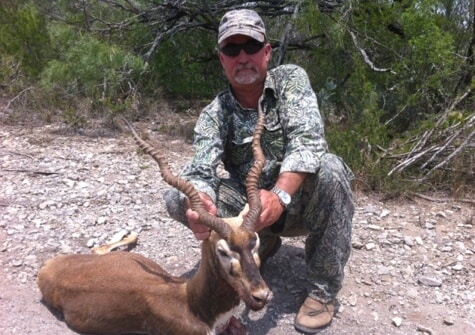 Perhaps the earliest releases of exotics were of nilgai antelope acquired by the King Ranch in the 1920s from the San Diego Zoo and stocked on the ranch's South Texas rangelands. During the same decade Blackbuck Antelope and Axis (also called chital and spotted) Deer, Sika Deer, and Sambar Deer were released. From the late 1930s through the 1950s Mouflon Sheep, Eland Antelope, Red Deer, Swamp Deer (Barasingha), and other species were released.

Today, more species and greater numbers of exotic big game are in Texas than anywhere else in North America. Some species, such as the Nilgai, are probably more numerous in Texas than they now are in their native habitats.

Exotics are found in about half of the 254 Texas counties; 55 percent are concentrated in the Edwards Plateau. About 70 percent are confined on pastures by game-proof fences. The remaining 30 percent range free. The most numerous species have developed substantial free-ranging populations.

Studies indicate that Axis, Sika, Fallow, Nilgai and especially Wild Hogs, are dominant competitors with native deer for food, and on some heavily populated ranges, native deer are declining as the exotics increase. A major need is proper control of their numbers where prolific free-ranging populations exist. Favorable economic methods of control are to harvest them by sport hunting and for lean delicious meat. Currently, there are no closed season on Exotics and no daily bag limits. 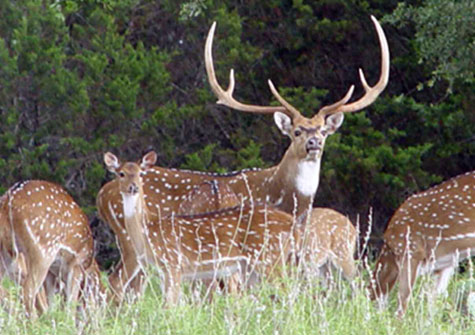 The Axis Deer, or Chital, is native to India.

They are considered to be the most beautiful of deer, with a bright reddish coat marked with rows of white spots that persist throughout life. Antlers of males are large but simple, usually with only three points on each side. Axis Deer were first introduced into Texas in the 1930s and now inhabit at least forty-five counties. Large Free-Ranging Herds can be found all over the State, but most are found on the Edwards Plateau where the semi-open, dry scrub forest vegetation resembles that of its native habitat in India. Axis are larger, stronger and meaner than the Native Whitetail Deer, which gives it an advantage over other Native Wildlife in competing for available food. Unlike all other Antlered Animals, the reproductive activity of the Axis can occur year-round, but most breeding occurs in June and July. During the breeding period males bellow loudly and wander in search of receptive females. Females mature sexually and first breed at fourteen to seventeen months of age. Males are probably capable of breeding as yearlings but must achieve adult size to compete for females. Vocalizations are important in Axis deer society and one of the most noticeable characteristics of this animal. Axis deer are also remarkably resistant to disease, a fact that may help explain their success as introduced animals.

With few exceptions, Axis deer are not regulated by game laws. Since these animals are non-native, they are considered landowners' property and may be bought, sold, or hunted at any time. Therefore, they offer challenging hunting opportunities at times when native species are not available. The meat is of excellent quality and is considered by most to be much better tasting than Venison. 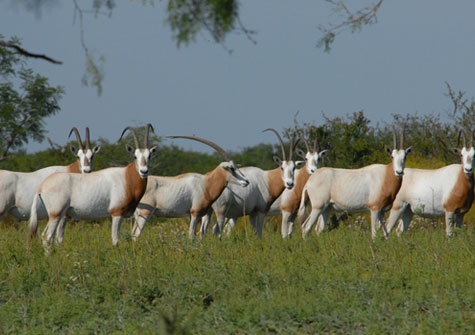 Scimitar-Horned Oryx is a member of the Antelope family and is a native of arid North Africa.

It is a large, spiral-horned Antelope, nearly 4-feet tall at the shoulder and tilting the scale at more than 350 pounds. The male and females both have horns. The arching horns are more than 3 feet long, with some measuring in the 40-inch class. This large and beautiful animal is white with a chestnut neck and chest, and once populated almost every part of the North African continent. It is easy for Scimitar-Horned Oryx to survive in extreme heat and can even go for weeks without water. The Scimitar-Horned Oryx is a fast, clever and strong antelope with a temper that hunters should match, and hunting these magnificent Antelope offers a challenging and exciting experience. Today, the Scimitar-Horned Oryx is extinct in its Native land, but thankfully they were imported to Texas in the 1970s and now number in the tens of thousands here in Texas. Ironically, Texas has helped prevent their total extinction. Scimitar-Horned Oryx Hunting raised controversies a few years back because these animals are listed as an endangered species. But it turned out that a strong economic incentive helps in preserving the Scimitar-Horned Oryx, and it is now understood that it is the Hunters that preserve and pay for the survival of these animals. 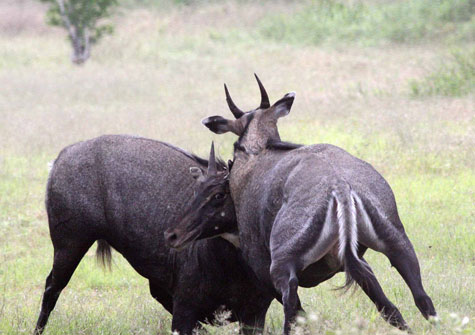 Nilgai are native to India and Pakistan and are one the largest members of the Antelope family.

Bulls can weigh 600-850 pounds and should not be taken lightly. They have a thick elastic hide that covers their neck and chest area that is up to one inch thick, offering them protection in severe territory breeding battles. Their elastic hide also covers and seals entrance and exit wounds (if there is one) leaving little or no blood trail making tracking very difficult. An average mature Bull will have 8 inch horns or better with a base approaching the length. Horns that measure 9-11 inches are exceptional. Nilgai can live up to 20 years in the wild. This may be the reason they are so smart. I would have to say they have a great memory as well because they act like they have seen everything before. With their keen eyesight, impressive hearing, great sense of smell, and an uncanny sense of approaching danger, you have a game animal that is very challenging to hunt. Nilgai typically herd in small groups of 10-12 animals, although larger groups of 20-50 are also common. Males and females remain separated for most of the year with Bulls joining Cow/calf groups only for breeding. Most of the mating activity occurs from December thru March. However, breeding can occur throughout the year. Bulls become sexually mature by 2 ½ years of age but usually do not compete successfully with other males until about 4-5 years of age. For this reason large herds of adolescent males are commonly seen together until they’re old enough to compete. Nilgai is also touted as one of the best tasting of all Texas Exotics, but of course, they ALL are. 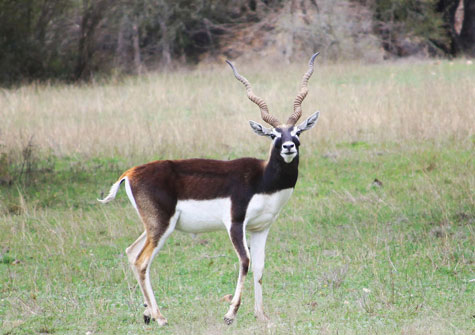 The Indian Blackbuck Antelope is one of the most popular exotic animals in Texas.

Since introduction in Kerr County in 1932, the Blackbuck has multiplied to nearly 19,000 on ranches throughout the state. Nevertheless, most still inhabit the Edwards Plateau. As the name Blackbuck implies, males darken at maturity. White highlights the eyes, ears, chin, underparts, and rump. Even fawns have these markings. They are brown but turn tan after about a month. Grown males have ringed horns spiraling in a V at least thirteen inches above the head. Record trophies exceed twenty inches. Live weights on Texas herds average eighty-three pounds for males and fifty-eight pounds for females, and maximum weight approximates 125 pounds for mature males. The blackbuck eats mainly grass and are timid at feed stations. They can compete with the native white-tailed deer, however, when natural food is sparse, because whitetails cannot match the blackbuck's versatility in the use of different plants.

The social units of the blackbuck are female groups, mixed groups of both sexes, bachelor groups, and territorial males. Since territorial males monopolize prime grazing, female groups frequent their territories. Territorialism facilitates breeding by giving the male a clear field for courtship. If a doe tolerates following, the "mating march" changes into circling, with the male in a "nose-up" display. Males mature sexually by eighteen months but take about 2½ years to reach physical maturity. When they attain full strength, they are ready to become territorial at any opportunity. Females can conceive as young as eight months, although most first-time mothers conceive at around seventeen months. Blackbuck Antelope extremely quick and have keen eyesight, which makes them very challenging to hunt. But their beauty and long spiraling horns make them one of Texas most sought after Exotics.

Website design,
SEO and support by
Fish And Hunt USA